Earlier this year I did an interactive rebase for the first time and I was impressed by what one can do with it. I also found it to be a little complex at first. Hopefully this guide will help remove some uncertainty around it.

Also, because it is so powerful and you can essentially rewrite history, a small warning before we begin: There are many schools of thought on Git and whether rebasing is a good idea or not. This post will not dive into those discussions and is purely meant to walk through the basics of using interactive rebasing.

In this example, we will work through a situation where we have been working in a feature branch and we have a couple commits we would like to change or delete. Here is what our git log looks like: 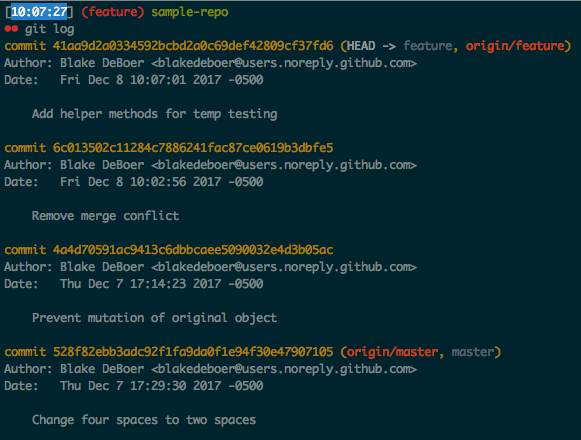 This situation is a good candidate for interactive rebasing. Scott Chacon, in his book Pro Git, describes interactive rebasing as follows: "Sometimes the thing fixed ... cannot be amended to the not-quite perfect commit it fixes, because that commit is buried deeply in a patch series. That is exactly what interactive rebase is for: use it after plenty of [work has been committed], by rearranging and editing commits, and squashing multiple commits into one."

What commits do we want to modify?

To start an interactive rebase, we need to tell Git which commits we want to modify. We do this by referencing the commit immediately prior to the earliest commit we want to modify. Or, put simply, we reference “the last commit [we] want to retain as-is,” according to Scott Chacon.

Based on our example, we will run either:

Which opens up this window in Vim: 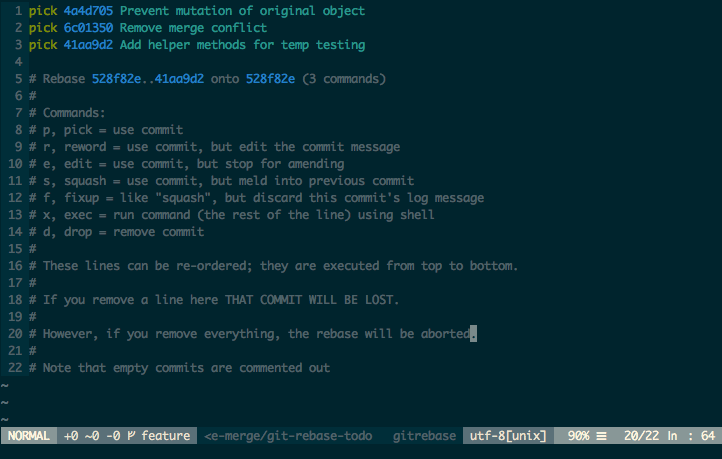 If you don’t know Vim, just click on each word pick that you want to edit and then hit the <i> key (for insert mode). Once you’re done typing hit the <esc> key to exit insert mode. 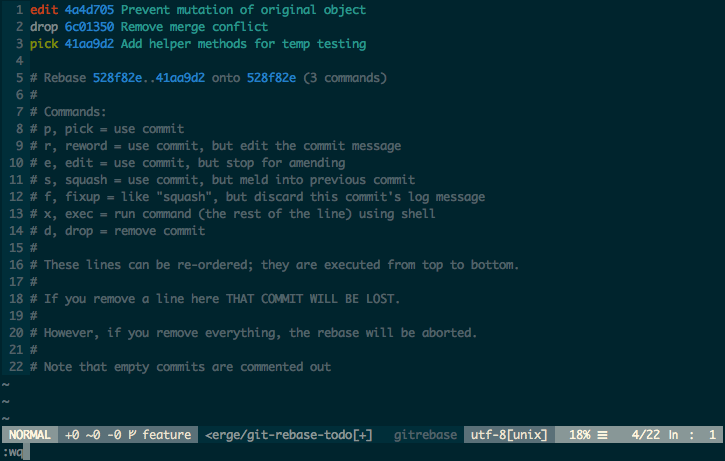 Back in the terminal we see this message:

This makes sense that we are stopped at 4a4d705. This is the oldest commit in the series of commits we want to modify. We will begin with this commit and work our way through each commit until the most recent. 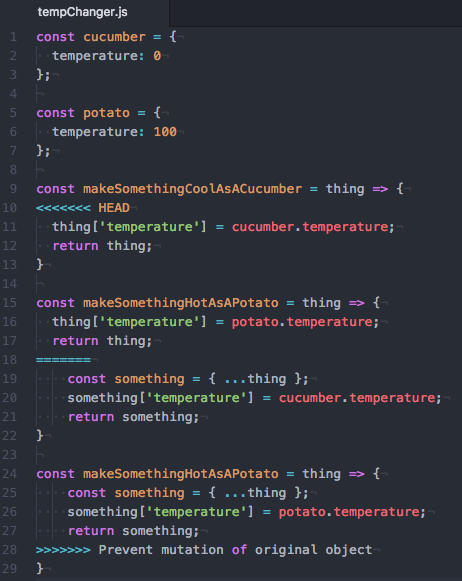 So we fix the merge conflict in the file but what do we do now? When in doubt, git status: 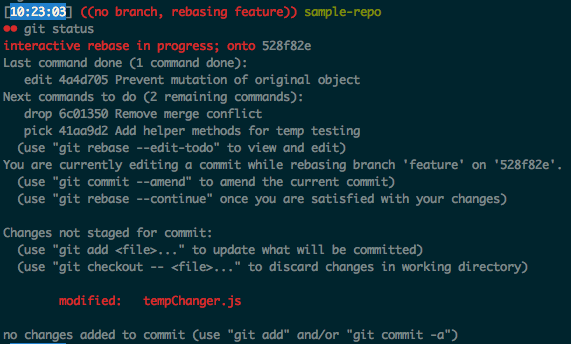 Cool! This is actually helpful. We see that we are currently editing 4a4d705, and we see the next two commits to be acted upon after this one.

The rest of the message is explaining a familiar workflow to us. Git tells us if we want to amend the commit we run git commit --amend. This will essentially act as our typical git commit we use in a normal workflow. At the bottom of this message we see our file was modified reflecting the changes we just made to remove the merge conflict. We need to stage the file before we commit. This no different than a normal workflow.

All we do is git add tempChanger.js to stage the edited file and then git commit --amend to commit the staged file! This will now open a Vim window again with the commit message: 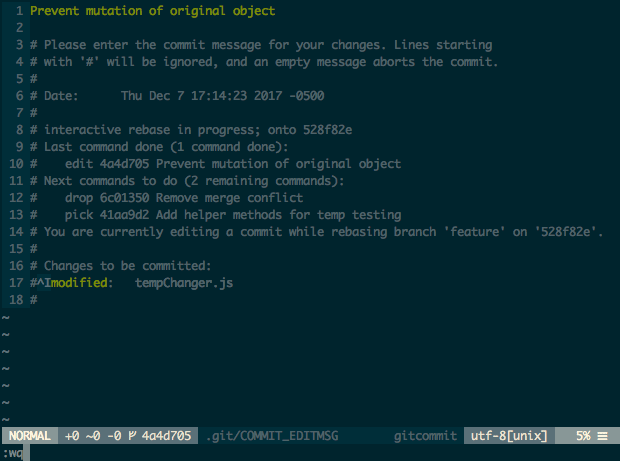 We have now edited our old commit. So now what? Run git status:

We don't have anything else to change in the commit so let's continue!

We run git rebase --continue and we see the following message:

Note, if we had more commits to edit, we would’ve simply moved onto the next commit and started the process of amending it just like we did above. The cycle continues until there are no commits left. 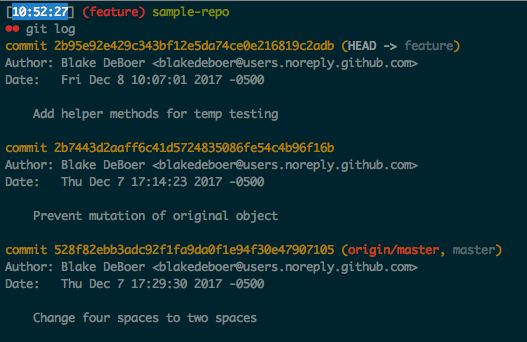 You will notice a few things have changed from before we started the interactive rebase:

Side effects of interactive rebasing

For the two most recent commits in our git log, because they have new SHA-1’s, Git sees them as entirely new commits. This is even true of our last commit, 2b95e92, where neither the commit message nor the files changed at all. This brings up an important point with interactive rebasing: If you modify a commit, that commit and all successive commits will have new SHA-1’s.

Technically, you could get around this by using git push --force but that is very dangerous. If the remote branch has commits from other people but your local branch does not have those commits yet, you will effectively delete their commits.

Another solution is to use git push --force-with-lease which will only modify your commits but not commits belonging to others, though this can also be problematic. For example, if another developer already has those commits that were given new SHA-1’s on their local branch, when they pull the remote branch, they will have merge conflicts with each of these commits.

The key takeaway from this section is it is much easier and safer to use interactive rebasing on commits that have not yet been pushed to a remote branch.