Conference in the Catskills 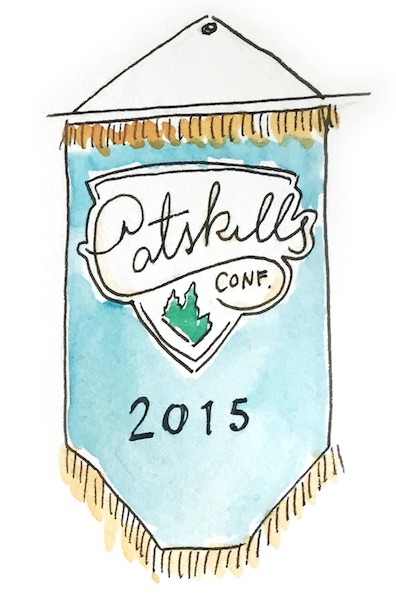 The whole thing seemed too good to be true: autumnal foliage, blacksmithing, craft cider, square dancing, live music spanning genres from folk to rock and roll... at a tech conference! It wasn't. The first annual Catskills Conf combined all of my favorite things all in one place — and included a very special group of people — in the Hudson Valley. It was also special weekend because I decided to give a lightning talk — my first at a conference.

On Friday afternoon, the bus carrying city-dwellers excited for their escape to nature arrived at the Ashokan Center near Kingston, NY in the Catskills. We all received bunk and activity assignments, along with the usual (beautifully designed) conference swag, adding to the camp vibes. The main presentation space was a cozy high-ceilinged log-cabin type space with custom felted banners for the conference on the podium and walls.

At the end of the first day of talks it was my turn, along with five other attendees who submitted lightning talks. I had five minutes to stand behind the podium and speak to a room full of people I highly respected about my topic of choice: progressive enhancement. Having given a slightly longer version of the talk twice prior at meetups in NYC, I was feeling pretty confident. But these attendees had travelled and paid good money to be here, and already sat through a few hours of talks.

I think it went well. One thing I would do differently is to practice without speaker notes. I did not actually need them, and they just served to make me more nervous about missing something. I'm glad I got to give my first talk at a conference in such an amazing space, and on the first day too, since it gave people a topic to come up and talk to me about throughout the rest of the weekend. Thankfully, the community was very supportive and welcoming, and I received lots of positive feedback, and even an invitation to come and speak at a meetup in the area some time in the future.

As for the rest of the speakers, themes of community and using one's creative skills to innovate and spark change flowed through all of the conference talks over the next three days. Some highlights for me were:

Outside of the conference talks, there were many other, what I'd like to call, 'extra-curricular' activities. On Friday night, Fleishers Craft Butchery gave a pig butchering demonstration. Saturday afternoon involved picking two activity sessions from a list of many (I chose foraging and wearable tech). There was even a birds of prey show on Saturday night. The nightly entertainment was incredible and diverse. Mike and Ruthy played folk tunes on Friday and later led square dancing, which was way better than I remembered from middle school gym class. On Saturday, local rock group Monogold and lovely Adrien Reju took the stage. Jonathan Mann aka Song-a-day Mann was there to create a song each day documenting the conference highlights in song form. And of course, there was a good ol' bonfire going on each night down by the creek.

The best part of the event though was the people — organizers, attendees, sponsors, and speakers — all with the goal of building a solid community of people who care. At the end of the last day, the organizers announced that Catskills Conf 2016 would be happening, and I am already excited.