What are the top 3 most common causes of performance issues for Ruby on Rails apps on Heroku?

1. Not understanding when to scale dynos. Most Rails applications on Heroku are using far more dynos than they really need for their request load. Heroku’s dyno sliders make scaling simple, but they also make it easy to scale even when you don’t need to. Many Rails developers think that scaling dynos will make their application faster. If the app is slow, scale up the dynos. Most of the time though, it won’t work! Scaling dynos only speeds up response times if requests are spending time waiting in the request queue. You can see this in NewRelic. The green area at the base of the web response time graph is the amount of time requests spend in the queue. This is typically about 10ms - if it becomes more than that, scaling dynos (adding concurrency, in effect), will alleviate this issues. 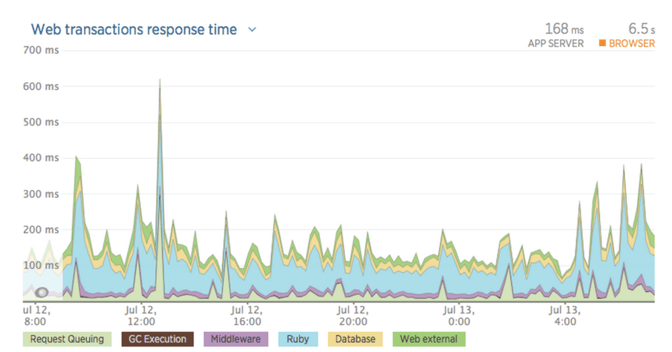 The same applies to worker dynos. Scale them based on the depth of your queue. If there aren’t any jobs waiting to be processed, scaling your worker dynos is pointless.

2. Memory bloat. Heroku dynos are small. The base 1x dyno carries just 512MB of memory, the 2X 1024MB. While Heroku (correctly) recommends using a worker-based multi-process webserver like Puma or Unicorn, far too many Rails developers don’t know how much memory just 1 worker uses to run their application. This makes it impossible to tune how many server workers are running on each dyno.

It’s simple math - the maximum number of processes (unicorn workers, puma workers) you can run per dyno is governed by the following formula:

Heroku recommends setting the number of worker processes per dyno based on an environment variable called WEB_CONCURRENCY. However, they also suggest that most applications will probably have WEB_CONCURRENCY set to 3 or 4. This just hasn’t been my experience - most Rails applications would be comfortable at WEB_CONCURRENCY=2 or even WEB_CONCURRENCY=1 for 1X dynos. For example, for a typical Rails application, the app will use about ~250 MB in RAM once it’s warmed up. This is a big number (I’ll go into ways to measure it and make it smaller later), but this seems to be the usual size. Now a 1X dyno only has 512MB of RAM available, and the master process of a typical Puma server will use about 90MB of RAM itself. So with WEB_CONCURRENCY set to 1, we’re already using 340MB of RAM! Scaling WEB_CONCURRENCY to 2 will use 590MB, sending us sailing by the memory limit of the dyno and causing us to use ultra-slow swap memory.

So the problem here is twofold - most Rails applications use way too much memory per process, and most developers don’t set WEB_CONCURRENCY correctly based on their application’s RAM usage.

3. Inaccurate performance metrics. Do you use NewRelic? Great! Do you deploy with the 12-factor methodology, as encouraged by Heroku? Even better! But a 12-factor application (and this is true of your application if you use the `rails-12factor` gem as recommended by Heroku) serves it owns assets, rather than uploading them somewhere else like Amazon S3 and serving the assets from there. And if you’re serving your own assets, NewRelic (and the default Heroku metrics page onheroku.com) is measuring those asset requests and adding them into your average server response times.You *must* exclude the assets directory from NewRelic’s tracking to get accurate average server response metrics - you can do this in it’s provided YAML configuration file.

What are some common symptoms of those problems?

What can be done to address those problems? How long does this typically take?

Is there anything developers should be mindful of when creating new applications on Heroku?

Implement all the little things that make your app faster right from the start.

Do you have recommendations for how to keep these performance issues from recurring? Monitoring, dashboards, performance tests?