Using the ASK Framework to Give Good Feedback

Feedback is super, super important. It is essential for career and personal growth, team health, and overall wellness of group or company. You know it must be a big deal if it is one of the XP values!

No matter your position on a team, it is crucial to know how to give useful feedback—both positive and negative. One way to evaluate feedback is to use the ASK framework, which says that good feedback is Actionable, Specific, and Kind.

What is the Ask Framework?

Let’s go through some definitions and examples. Fun fact: these are all real pieces of feedback I’ve received!

The receiver is able to do something with the feedback. Make sure they understand exactly what you want them to do in response. Avoid ambiguity by making it clear what their next steps could (or should) be.

Yes: I would like to know earlier if you realize that a story is going to take longer than expected.

No: You took too long to finish that story.

The receiver understands exactly what events prompted the feedback. Try not to make generalizations, and instead give examples of the behavior or situations.

Yes: When we were pairing this afternoon, I felt like I was doing most of the driving while we were working on the back end.

No: You aren’t good at the back end.

While this may seem obvious, delivering good feedback requires empathy. Even if it’s the most crucial feedback in the world, if it isn’t delivered kindly, it may fall on deaf ears.

Yes: It’s important to make sure that variable names are clear. Calling this method `meow` doesn’t do a good job of showing intent to the next developer who reads this code.

No: That’s a stupid method name.

Let’s say you’ve been pairing with a developer who hasn’t been coming back from breaks in a timely manner, meaning that you’ve either had to work without them (and had to give context later) or been stuck waiting.

Here’s a Venn diagram of what different kinds of feedback would look like in the ASK framework: 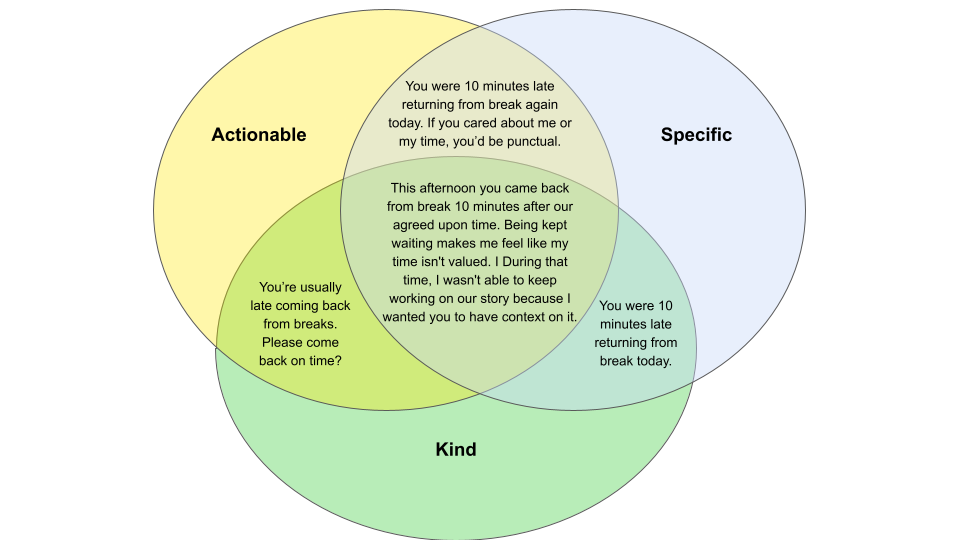 Giving good feedback takes practice. It’s a muscle that needs to be flexed often to better ourselves and our teams. The next time you have to give it, I hope the ASK framework helps!

Subscribe for Stride blog posts to be delivered to your inbox every two weeks!