Today on the show we will be talking about, the show! We are going over our editor picks of the Rabbit Hole for 2017, reminiscing over the best episodes since we started recording the podcast back in September of 2016. In this episode we dive into the behind-the-scenes of how it all started, what has changed over the last year, and how we have matured behind the mic since day one. We even to into the little details like our audio quality differences, the topics we’ve covered, and some of our favorite guests that we’ve had on the show. Finally, we get into episodes and guests we are excited for in the new year as well as the goals we are setting for ourselves and the podcast.

Transcript for Episode 43. Editor Picks of 2017

[0:00:55] DA: Right. That was a training montage. Like we were sweating like there was a lot of like people berating you for being too loud. We were.

[0:01:17] MN: Yeah, except for [inaudible] who hates me and probably doesn’t listen to this show and will probably shake me when she hears that. But yeah I think we record late enough where it's not too crazy in the office and we get to actually, you know, we've matured over, you know, standing behind the mic and got some great great content out of everything.

[0:01:47] DA: Yeah. I mean, it’s amazing. Like, we started out with like — what was the first one? Was it TTD. TDD’s the first one that we dropped that was not a five minute intro episode.

[0:02:11] MN: We had a lot of editing, like different shops come in and edit our stuff and we finally got the groove to figure out what’s, you know, what's great quality and what's awesome and stuff like that.

[0:02:23] WJ: Yeah those older episodes had great content, it’s just the polish was not there yet.

[0:02:27] MN: I mean, I think yeah maybe we could go back and  re-record them? I don’t know if we’d want to say the same exact thing just like get a transcript and just read it out. Like, “Today we'll be talking about Deep Learning.” I don't know if that would work.

[0:02:58] DA: Yeah, but I mean there's a lot of episodes that we really like legitimately enjoyed. Right? Like I actually really enjoyed talking to Adam about functional programming like having numerous guests on the show.

[0:03:15] DA: Yeah, I never thought the thing about functional programming could be so engaging. Most of the time you read a Stack Overflow post about Scala and it devolves into arguments about monads and closures and the eyes start to glaze over. But you know that was actually very practical and awesome discussion with Adam.

[0:03:53] MN: There you go, jump back. One of my favorite that has a guest on the episode of The Rabbit Hole was CSS and JavaScript with Ian McNally. Shout out to Ian.

[0:04:03] MN: Yeah it was and honestly, when we were setting that up it was like, “All right we’re just going to talk about JavaScript, we’re going to talk about CSS and when it gets to the CSS point, I’m not going to contribute anything, this is going to be boring and CSS is boring and I hate CSS.” But it turned out to be a really interesting conversation. I liked some of the problems that you deal with and how to how to solve them. What kind of packages you want to look forward to when building CSS modules or like different frameworks and that kind of stuff.

[0:04:40] MN: Yeah and I think like having a guest like Ian was really really cool to sit down and

explain some of those concepts.

[0:04:49] WJ: I actually really liked that because when I went to go and listen to the episode it was like listening to somebody else's show, which is a really interesting way of listening to the Rabbit Hole. It gave me a new perspective. I feel like a real listener now.

[0:05:15] WJ: Yeah, TDD was episode 2 and pair pregaming was episode four. So that is like way back in the beginning.

[0:05:20] MN: Yeah, so definitely give a listen to those things that you need to brush up on your TDD or pair programming skills.

[0:05:26] DA: Oh yeah and you know Bobbie if you want to have that like listener experience you can listen to it learning a new language episode that I recorded with William.

[0:05:34] MN: Oh yeah. Oh yeah I remember listening to that and it was like, “Oh wait.” It's like I was watching you guys record and like I wasn't in the room till I add my two cents. It was great. It was just like I didn’t have to hear myself for a whole episode. It was insane and I think I was not there because I went on vacation.

[0:05:35] MN: Yeah exactly, because I had an episode that we had prior to that we recorded an episode how I hated vacationing and why you needed it.

[0:06:09] WJ: We're just going to take credit for that even though really it was all you. I think one of my favorite episodes was Psychological Safety, Episode 31. Not so much because it is technically challenging, it wasn’t. It was a very soft episode. We didn't get to any anything super programming heavy. But it was one of those episodes that people who aren't software developers came up to me and commented on, which I thought was really nice that we could have a bigger reach like that. Because a lot of the things that we talk about while they are framed in the lens of software development, are applicable to a lot of things.

[0:06:47] DA: Yeah, especially like going back to the vacations episode; that's been another on that got a lot of comments from different people like, “Hey, yes I should take a vacation.

mentioned earlier, which was potentially or possibly our most downloaded episode was Salary's with Hayley Ricks. I think like just like the concept of talking about salaries and you know knowing your worth and stuff like that definitely brought a lot of listeners in to you know determine you know how to assess myself so I can get better pay as a programmer? But you know pretty much anyone can listen to that episode and realize some of the things that they could use or learn to you know get that bump and promotion.

[0:07:32] DA: Yeah it was nice too because it was like clearing the air. Like it's often kind of feels a little bit [inaudible] to talk about out loud. It’s like, “Oh, if it’s me and my Google in the shadows, got to Glassdoor.”

[0:07:48] MN: Yeah I think it was pretty cool to have that conversation out in the open at the end that a day, which was really cool and I'm glad that Hayley was able to get on

and talk about them.

[0:07:58] DA: Yeah, I feel like, we were really fortunate to have a lot of really awesome guests. Like the one to just drop pretty recently with Max, There Are No Rules in Ruby. Like that was that was another awesome time. It was just fun having him on the show. Really looking forward to having more guests on the show and learning from more people in the next year.

[0:08:16] WJ: Yeah that reminds me, I think probably the episode that I'm most excited about dropping, which we've already recorded which we’ll release in January is this episode with Brian Guthrie on dev ops and he has a really interesting perspective and he's very well spoken. So that was a lot of fun to record and I know it's going to be really fun to listen to.

[0:08:42] MN: I have one in mind, a guest that I wanted to have on board. I guess to bring it to a level of something more programmer related. He actually — Jacob O’Donnell, I might actually have his name wrong, but he brought up the concept he had the title for it already. So I'm just going to say it out there. He wants to talk about deaths by a thousand ifs.

[0:09:08] MN: Yeah it does, and I mean I’m sure a lot of developers and consultants out there may have been bitten by the thousand if’s.

[0:09:17] MN: Yeah and I think that was pretty cool. So I want to have him on board to have that conversation and figure out ways we could get out of that death. Cheat death by

not getting that thousand ifs.

[0:09:26] DA: Yeah. Man, other guests — I’d really love to have more of Emmanuel, our regular guest. He’s been busy working on a new podcast, so I’ve been missing him.

[0:09:48] WJ: There’s another personality who is going to be on that podcast with him too.

[0:10:00] MN: Yeah. Well, there’s more info in the future, in 2018, #goals we’re trying to achieve and I’m really looking forward to being to, you know, give support to the new podcasts that’s coming.

[0:10:14] DA: Yeah, I'm looking forward to learning more about Blockchain too. I mean you guys keep on talking about it and I am completely ignorant. You guys need to educate me.

[0:10:33] MN: Yeah definitely. You know, reach out a Satoshi Nakamoto and tell him to come down and teach us a little about Blockchain as well.

[0:10:42] MN: Yeah, if anyone has his Twitter or his phone number, send them our way. Maybe you can get him to talk about Blockchain. That’s be really, really dope. That’ll be the, you know, pretty awesome guests. Yeah, I’m sure we have other guests in the pipeline and other topics that we will discuss and I'm sure you are looking forward to that as well.

[0:11:00] DA: Yeah and we'd love to hear some suggestions if anyone out there has any thoughts about potential topics we can do that you're eager to hear about. Definitely hit us up.

for dropping some topics.

[0:11:28] MN: Awesome. I'm like a Nunez, and if you have any other suggestions and topics that we should do, feel free to hit us up at Twitter.com/radiofreerabbit and if you haven’t, please five us a five star rating and subscribe.

This is the Rabbit Hole. We'll see you next year.

Episode 42: There Are No Rules in Ruby 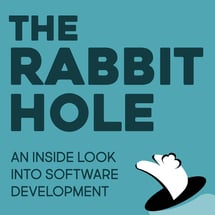